Skip to content
Loading...
Latest news
How to Keep Your Product Strategy From Turning Into a Game of Jeopardy
The Maturity of your Market Dictates the Type of Product that You Need
Politics and your next release
What is a Successful Product? An Overview of Metrics and KPIs to Track Product Success
Product Management – You’re doing it wrong
AlanEnterprise SoftwareMarketingProduct ManagementProduct MarketingSalesSales EngineerWin/Loss Analysis

Have you ever heard this story before?

The lead came in, and it looked hot. We gave it to our best rep, who called right away. Gotta strike while the iron is hot, as they say. The rep asked all the qualifying questions, and it looks like a huge opportunity. They have budget and are ready to move. She sets up a meeting, the SE does a few slides and a demo, everyone seems happy. They ask for a quote, we send it.

You know what comes next, right?

Welcome to the stuck deal. Sales reps, sale teams, sales managers, and sales VPs see this all the time. In the midst of some win/loss analysis work, several of my clients have started to send these deals to me. “See what you can find out,” they say.

Here are a couple of the most common findings:

No access to decision maker or other key players

Cost/Benefit is not demonstrated or not believed

What happens here is that two parties end up in a stalemate. In negotiation theory, this is described as arriving at two different, or diverging, positions. It’s like they’ve walked up to the top of two mountains and are now separated by a valley in between. 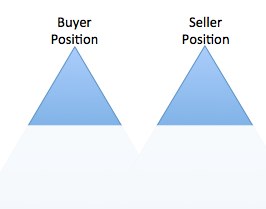 In most cases, because the seller is selling, they have lost the ability, or the permission from the buyer, to move down the mountain from the divergent position to the underlying interests of the buyer. A really good seller can do this sometimes, but often the buyer simply stops responding at a certain point, and if you can’t get the conversation started, it doesn’t matter how good you are.

What’s needed in these cases is to walk down the mountain to the underlying interests. These conversations reset the discussion and re-build the relationship map from the ground up. 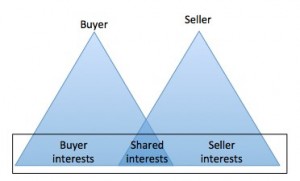 When I have these conversations I have an advantage over the seller: I’m not selling. So it is a little easier, perhaps, to reset the conversation. In some cases, the overlapping interests are so small that they do not justify further sales activities. We “put a fork in it”, as they say. The account may need to go back to marketing for further nurturing, or maybe it really is just dead. If so, move on! In sales, my favorite four letter word is “N-E-X-T”, because we don’t have time to waste on non-opportunities.

In many cases, however, the overlapping interests are significant, and when reexamined in this way, the buying discussion can be reset. I’ve helped a client reset, and eventually close, a $5M deal as the result of a one hour phone call. Without that call, the CEO told me, they would have lost the business.

But the secret to unsticking the stuck deal is the same, regardless of who does it:

I will be touching on this topic at Product Camp Silicon Valley on Saturday April 2. My talk is called “It’s never about price: The real reasons behind 250 B2B buyer interviews“, and will be held at 11am. Hope to see you there.

Previous articles in this series:

Your price is (probably) not the problem

Thanks for the discount, I’m still not buying yet