Skip to content
Loading...
Latest news
How to Keep Your Product Strategy From Turning Into a Game of Jeopardy
The Maturity of your Market Dictates the Type of Product that You Need
Politics and your next release
What is a Successful Product? An Overview of Metrics and KPIs to Track Product Success
Product Management – You’re doing it wrong
InnovationInteractionMessagingProduct ManagementSaeedUser Experience

I returned recently from a business trip to Germany. Whenever I travel, whether for business or pleasure, I find it difficult to take my “product manager”  hat off. Little things catch my eye, and often seemingly mundane things such as efficient parking lots draw my attention.

If at first you don’t succeed…

Back in January after a business trip, I wrote about an ad I saw in the airport promoting Accenture. The image is below.

The misspelling of word “Billions”, simply to fit the concept was what really irked me. As I was walking through Frankfurt airport last week, I saw another ad from the same campaign. 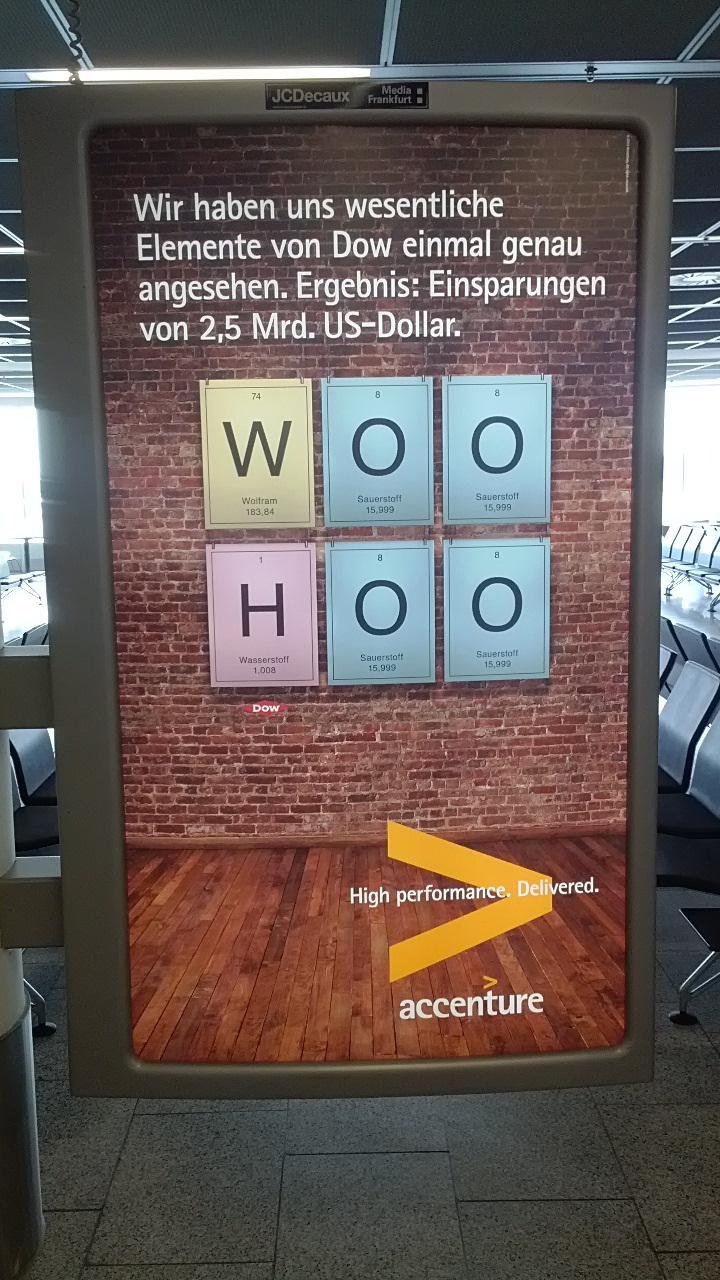 The German text at the top (“Wir haben uns…”)  is similar to the text in the English ad:

After studying the critical elements of Dow. The result: savings of 2.5 billion U.S. dollars

[Feel free to give me a better translation if possible. This is a modified version from what Google translate provided.]

I’m assuming “Woo Hoo” translates into German as it does in English. This ad is a bit better (IMHO) than the English version above.The “Woo Hoo” catches the eye (much more so than “BiLiONS”, and there is a hard fact — 2.5 billion in savings — embedded in the message.  Perhaps the German market is more discriminating or their agency learned from their misstep in North America. Not a great ad, but certainly better than the English language one.

BTW, if you want to see other Accenture (English) print ads,  you can see them here.

Tailor your messaging to your audience 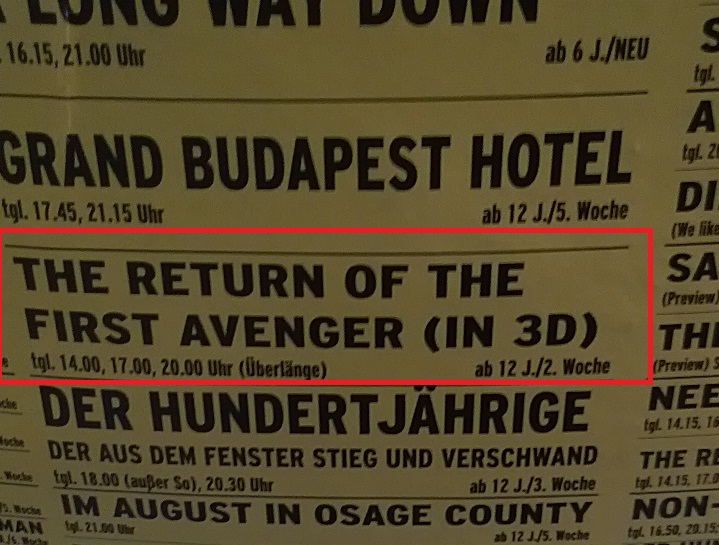 While waiting for the subway in Frankfurt, I started reading a poster for movies playing in town. “The Return of the First Avenger” caught my eye. In North America, this movie is called “Captain America: The Winter Soldier”.  Not a great name in my opinion unless you read the comics and know the story already. “The Winter Soldier” sounds like a description of Captain America himself. But I digress.

I’m a big fan of clear and easy to understand messaging. It sounds like a no brainer that everyone should follow, but somehow, in the bowels of marketing meetings, often very simple concepts turn into nebulous concepts that mean little to the target audience. So it’s nice to see examples where that didn’t happen.

In Heathrow Airport, whose waiting areas are often hard to distinguish from shopping malls, I had to take note of this establishment. No fancy name or confusing signage. Just a clear statement written from the customer’s point of view. And with throngs of multilingual customers passing by, there is little room for confusion, even if you don’t speak English. I ended up buying some food there: soup, sandwich, drink – what more could a hungry traveler need? 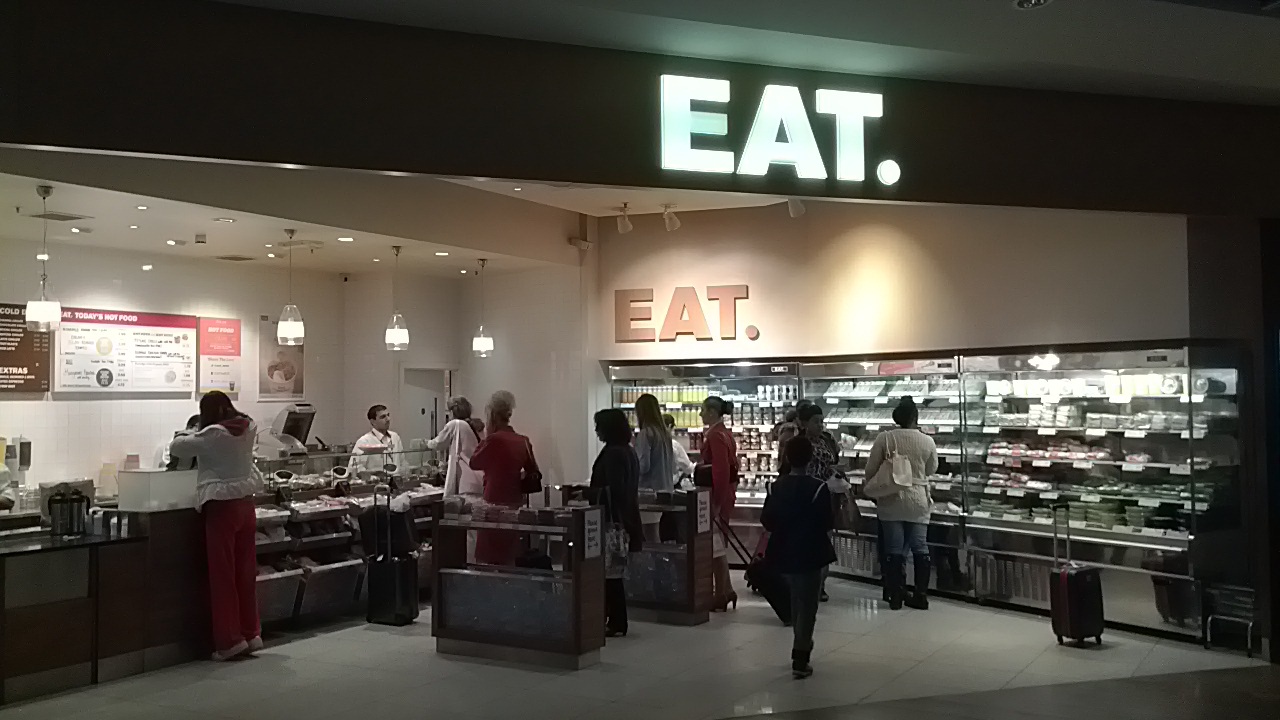 Measure and manage where possible 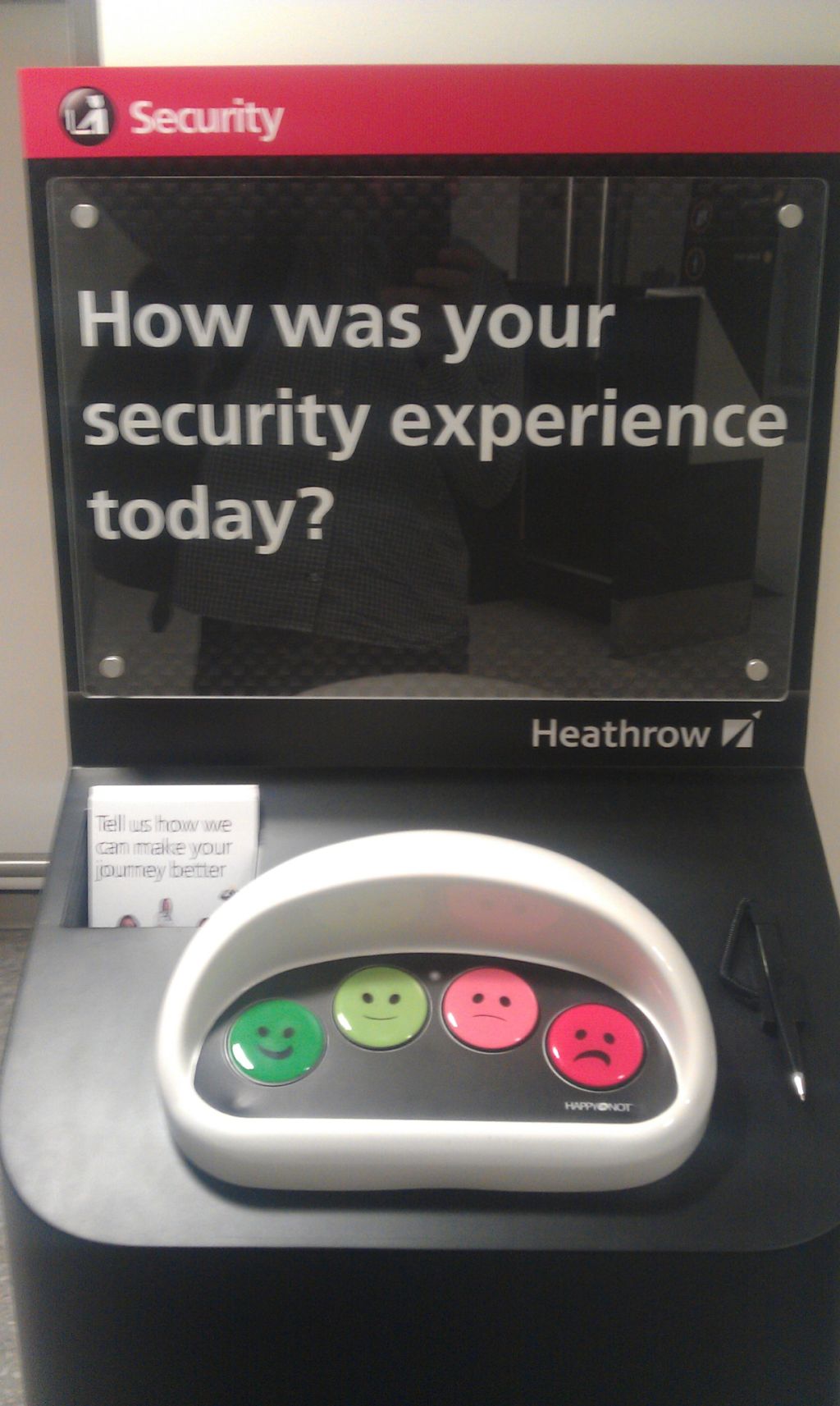 And lastly, after I had passed through the security check point in Heathrow, I came across this device.  I guess Heathrow Airport wants to know how they are doing with their security checks. The simple interface – 4 buttons – Very Happy, Somewhat Happy, Somewhat Sad, and Very Sad — is easy to understand and doesn’t provide a middle button – i.e. ambivalent or no preference.

There is also a paper form that asks for more detail — Tell us how we can make your journey better. I regret not taking a copy of one of those forms just to see what they were asking inside.

I did see one person walk up to the device and press a button so people do use it, but few people overall were pressing the button. This device was sitting near the exit of the security area and no mention of it was made via signs or security staff previously. If the security officers simply asked people to give them feedback as they via the device, there might be a higher response rate.

So there you have it. There are lessons we can learn everywhere. All that’s needed is a trip out of the office.