Skip to content
Loading...
Latest news
How to Keep Your Product Strategy From Turning Into a Game of Jeopardy
The Maturity of your Market Dictates the Type of Product that You Need
Politics and your next release
What is a Successful Product? An Overview of Metrics and KPIs to Track Product Success
Product Management – You’re doing it wrong
HeatherResearchUser Experience 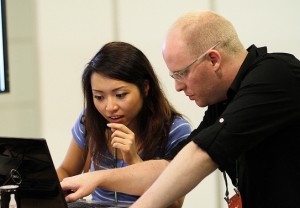 I was sitting right across from them when it happened.

I was taking notes while my client conducted the interview. Everything was going well. The participant was definitely in our target audience, she was thoughtful, articulate and engaged with the wireframes we were showing her.

What started as a great interview became mediocre (at best) when the participant asked a simple question… and my client answered.

The problem wasn’t the question, it was the way it was answered.

You see, my client gave a thorough answer that showed his expertise.

He said things like, “I’m sure you know program XYZ, well this will work the same way with one exception…,” and he didn’t notice her tentative nod that probably meant that she didn’t know much (if anything) about  program XYZ, but she wasn’t going to tell him that.

He used technical language and jargon and she continued to nod but got quieter.

When she did talk she repeated something he’d said.

My client wasn’t trying to bias the interview and get the participant to give the answers he wanted to hear. He was just having an interesting conversation about something he enjoyed. But in doing so he compromised his role as the observer and lost a chance to learn something about his target audience.

He showed himself as the expert that he is and the participant deferred to his expertise. She stopped sharing her thoughts and experiences and was happy to sit back and learn from him–making sure she didn’t give away her true knowledge level or possibly differing point of view.

At the end of the session my client didn’t see what had happened.  As far as he was concerned, he’d had an enjoyable conversation with someone who shared his ideas.  He didn’t realize the participant had spent most of her time echoing his comments.

Unfortunately this isn’t an unusual story. I see it happen again and again.

When performing user research, it’s important to establish a master and apprentice relationship with the participant.

The participant is the master. You are the apprentice learning from them.

You set this up this relationship at the beginning of the session.  I usually say something like, “We’re here to learn how you do things and what you think about the product we’re working on. There are no right or wrong answers, we want to know what you think and see what you do.”

I downplay the role the interview team has in the development of the product. I’ll refer to us as a research team and I never use titles for anyone. If the participant seems nervous or hesitant to share negative thoughts, I’ll out and out lie and say that we have nothing to do with the concept we’re showing them, and that our only role is to gather feedback – even if the product manager, lead designer, lead developer or CEO is standing beside me.

It’s important to pay attention to the terminology the participant uses and echo it back to them. This shows you are invested in what they have to say. It make them comfortable and encourages them to keep talking.

For example, if you were talking to a participant about how they used USB flash drives, and they called them “finger sticks”, you would call them finger sticks as well. If the next participant starts spouting speed specifications for different flash drives brands – you can get a bit more technical (while staying on topic of course).

Reinforce that the user’s ideas are valid, no matter what they say — especially when they give you negative feedback.

Most people don’t like giving negative feedback, so it’s important that you receive their comments openly and neutrally to keep encourage them to share their thoughts.

If someone reacts negatively to something I show them I’ll preface my next question with a positive comment about what they said. I’ll say something like, “That’s great feedback, can you tell me a bit more about what makes you think that?”

I make sure my follow-up questions don’t question the validity of their thoughts. If their comments show that they are misunderstanding or assuming something that is going to throw off the rest of the interview, I make the correction indirectly by starting with something like, “I see what you are thinking, and that makes sense. But what if….”

So how should my client have handled the participant’s question?

He could have said, “I can’t answer that right now, I’ll answer your questions at the end,” and then moved on.

However, when the participant’s question is on topic, I prefer to turn it back to them.

If they say, “What does this button do?” I’ll ask what they expect it to do.

You can learn a lot this way because people often ask questions because they don’t want to look stupid by assuming the wrong thing or saying something you won’t like. But when you directly ask for their thoughts they’ll usually tell you. And you’ll probably learn something interesting.

One of the keys to successful insight interviews and feedback sessions is to keep the master and apprentice model firmly in mind and take care not to step outside your role as the apprentice. When you’ve mastered this skill you’ll find yourself getting more and more out of your interviews.

What tactics do you use to keep an interview on track and ensure you learn as much as possible? I’d love to hear your thoughts in the comments below.

Heather is a user experience consultant and freelance writer who believes in doing everything from a user-centric point of view. She has 20+ years of experience in high tech and is well-versed in helping product management and development teams get to know their customers, understand usability issues and turn these insights into design innovations.

Heather can be reached at www.commconsulting.com or on Twitter as HeatherSearl.