Skip to content
Loading...
Latest news
How to Keep Your Product Strategy From Turning Into a Game of Jeopardy
The Maturity of your Market Dictates the Type of Product that You Need
Politics and your next release
What is a Successful Product? An Overview of Metrics and KPIs to Track Product Success
Product Management – You’re doing it wrong
BlackberryProcessProduct ManagementRequirementsSaeedStrategy 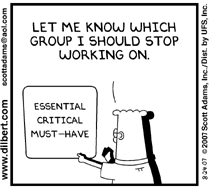 Everyone knows that when building technology products, one of the key tasks is to prioritize requirements —  what features are “must have” vs. optional or “nice to have” etc.

It’s the skill and discipline employed in making these prioritization decisions that is a major factor in whether products are adopted by customers or not. Users can be fickle, but they know what they need to accomplish and will quickly decide if the product is worth their time and effort to solve their problems.

There is never enough time and resources to build everything that is needed, and thus the necessary prioritization exercises.

There are many factors that come into play when making prioritization decisions.  These include technical feasibility, overall effort, fit for key use cases, alignment with product direction and potential alternatives for the end user.

It’s this last factor — potential alternatives — that is often abused during the prioritization process.

And the question is…

Often Engineering, but sadly in many cases, product managers, ask the following question far too often:

Are there any workarounds?

Often times, particularly when building a new product, there is focus on minimizing effort and reducing scope to fit into a fixed future release date.  The negative impact to the customer or the reduced product value are ignored.

Why? Because it’s easy to ignore them. The product won’t be released until some future date and the future negative impact is hard to measure; certainly a LOT harder to measure than the development effort to meet the release date.

I’ve seen this happen time and time again. Someone asks about workarounds. A potential workaround is described and then it’s off to the “future release” bin for that particular requirement. Do this 3 or 4 times, and the “small” impact of each postponed requirement adds up, but who’s counting at this point? The focus is on minimizing effort and meeting a target date.

And when the product is released and underwhelms the market, then what?  Double down on fixing all the gaps and increasing the value for the next release? Sorry, but that train has left the station. You never get a second chance to make a first impression. Your customers or potential customers are looking for alternatives. You’ve shown your (weak) hand to your competitors and they are smelling blood.

Workarounds can kill a product 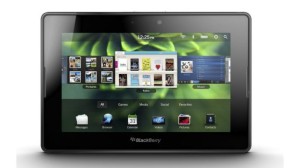 One of the most notable cases of death-by-workaround was the Blackberry Playbook. Remember that device? The first (and only) tablet from Blackberry — a company built on the strength of it’s email and messaging services — shipped it’s first release without any native email or messaging capabilities. Email and messaging could be had with a workaround — tethering the Playbook with a Blackberry smart phone — but people and the press objected loudly.

Sure, they released an update several months later that provided native email and messaging , but by then the damage was done. No one cared anymore and the product ended up in the liquidation pile.

None of this is to say that the Playbook was a bad product. In fact, I have several friends who’ve raved about it. But the lack of a CORE capability — email and messaging — in the first release killed chances of success. If Blackberry could add email and messaging in an update several months later, why didn’t they add it in the first release, even if it delayed that release by several months?

Be careful when talking about workarounds when planning product releases. Don’t let the “workaround” question end up “Playbooking” your product.

Tweet this: The most abused question when building new products http://wp.me/pXBON-45x  #prodmgmt #requirements