Skip to content
Loading...
Latest news
How to Keep Your Product Strategy From Turning Into a Game of Jeopardy
The Maturity of your Market Dictates the Type of Product that You Need
Politics and your next release
What is a Successful Product? An Overview of Metrics and KPIs to Track Product Success
Product Management – You’re doing it wrong
Product ManagementProduct MarketingSaeed 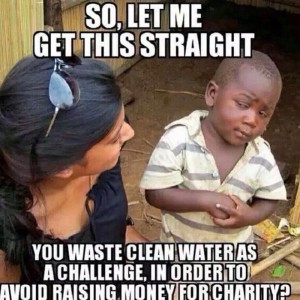 Unless you’ve been out at sea or in an isolated mountain cabin this summer, you’ve probably heard of the so-called “ice-bucket challenge“.  It involves pouring a bucket of ice-water over one’s head to raise awareness of (and to avoid donating to a charity for) a certain debilitating disease. (This is important).

While the charity has seen a surge in donations this summer, there are lessons that can be learned from this fad that can be applied to any other charities looking to raise funds in a similar way. Think of it as a strategic product marketing exercise applied to a charity product. But first, some background for those who are not up on the challenge.

Who’s participating in the challenge?

As part of the challenge, one can also call out other people and challenge them to pour ice-water over their heads. They have 24 hours to accept the challenge and comply, or donate money to charity. i.e. get soaked OR donate. Powered by social media, the ice-bucket challenge has quickly spread via participation from many famous people, including:

So from a social media perspective, it’s been a huge success. And donations are way up this year over last year.

Is it raising awareness?

But the question really is whether the campaign is achieving it’s goals of raising awareness.  In superficial terms, the answer is yes, but in real terms the answer is clearly no.  Try to answer the following questions and see how many you get right. (answers at the bottom of the post)

The answers are at the bottom of the post. How many did you get right? Use the Poll below to tell us – be honest! 🙂

How the campaign could have been improved

There are many reasons this campaign has problems and is a huge lost opportunity. The following are ways that it could have been much better. These lessons can also be applied to other potential viral campaigns.

1. Integrate education into the campaign

How many of the questions above do you think any of the celebrities could have answered? I think very few. You can’t raise awareness about something if people don’t know what it is.

I had to research those questions and answers. Granted, it didn’t take me a long time — a quick read of the Wikipedia page on ALS and a couple of pages on the ALS website itself — but why didn’t the campaign, as popular as it is, help me understand any of that?

A simple change — have people recite at least 1 fact about ALS (from a list provided by the ALS society) in their videos — would have reaped huge awareness benefits.

There are literally thousands of videos on the web of people “taking the challenge”, and most of them look more like self-promotion videos than awareness raising videos. Here’s one of the worst offenders – Martha Stewart. Watch the video.

It’s hard to imagine if Martha Stewart even knew why she was doing the challenge; aside from some kind of egotistical self-promotion — which clearly is the reason a lot of people are doing the challenge, celebrities or otherwise.

Instead of a bucket of ice-water over their heads, why not find a constructive activity that people could perform and ask them to do that and share that video?

BTW, just to be balanced, here’s probably one of the better celebrity videos. Benedict Cumberbatch takes a more thoughtful (and comedic) approach to this, much more so than most other people.

The ice-bucket challenge is the flavour of the month, or perhaps the fad of the summer (in the northern hemisphere), but then what? The surge in donations is good, but it’s a one time bump. What will the ALS Association do next year to sustain this surge?

Additionally, are they playing a zero-sum game with charitable donations? Is the money that’s coming to them taking money away that would have been donated to other charities? Is this the beginning of charity challenge warfare?

Instead of a hundred dollar donation, why not have a small (e.g. $10) monthly donation commitment? That’s much more convenient for a lot of people, and in the long run would probably deliver more money to the charity. How about getting people to actively participate in some local efforts to help those with ALS?

Oh yeah, and how about YouTube donating EVERY cent they earn from the ads running on all these videos celebrities have posted to the cause? e.g. Bill Gates video alone is about 16,000,000 views at time of writing. There must be at least 100,00,000 views across all of these videos and at an ad rate of $5 per thousand views (less than the $7, that’s $7.60 stated in this article), that’s $500,000 in revenue for YouTube, which could potentially be donated.

As an aside, I doubt it will be announced publicly, but when the donations to ALS next year are much lower than this year (unless a new “ice-bucket challenge” is successful), what will the ALS foundation do?

They’ve missed an opportunity here to really make a change in public awareness and participation. Let’s hope other groups learn from this and don’t make the same mistakes.