Skip to content
Loading...
Latest news
How to Keep Your Product Strategy From Turning Into a Game of Jeopardy
The Maturity of your Market Dictates the Type of Product that You Need
Politics and your next release
What is a Successful Product? An Overview of Metrics and KPIs to Track Product Success
Product Management – You’re doing it wrong
JenniferJimMultiple ContributorsPrabhakarProduct ManagementProduct MarketingSaeed

This blog has a number of contributors. We tend to all post individually at various frequencies, but for the end of year, we thought it would be a good idea to look at one question and get several reflections on it. Perhaps this is the start of a tradition. 🙂 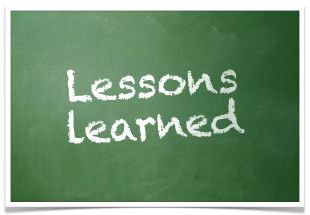 What is something important that you learned this year, and why is it important in our profession?

And of course, we’d love to hear from you. Either comment on what we’ve said, or leave your own answer to the question in the comments.

This year, I learned a lot about the importance of actively engaging in communities, both online and in person. As a result, I have taken the following pledge:  “always be building your network, especially when times are good – when you don’t necessarily need it”. I invite you to join me in this pledge.

I think that networking gets a bad name because many folks only leave their cocoon when they need to take from it. They need a job. They need a reference. They need to sell something. Take, take and even more take. Yet, if you focus on the give side, giving freely at any time, then you will never eat alone in a strange city or be wanting for a job. In one of my all-time favorite movies, Pay it forward

with Helen Hunt, her son Trevor applies this lesson to life in general.

It is so very important to our chosen profession, because most of us didn’t actually choose to be Product People – we fell into it. What we didn’t necessarily realize when we took the fall, was that we would be alone in our company. Seldom are there companies with large defined Product Management groups. But, by utilizing social media, Product Camps, classes and local product management communities, I know that I have built my own knowledgebase, expanded friendships and contributed to the collective pool of information available to others who join us as Product Professionals, but didn’t earn the education for it.

Moving forward, this is an integral skill and a necessary element for growing your professional knowledge. It is not as easy as it sounds, and takes a dedicated effort. Like so many other efforts, you only get out of it what you put in to it. So, as you plan to end this year and start the next, the question is “how will you contribute?”

Saeed Khan – The Power of the Individual

Perhaps this is a lesson re-learned as opposed to a lesson learned, but it’s one I think is worth reminding myself over and over again. This year has been a tumultuous year worldwide, from protests and uprisings such as the Arab Spring and the Occupy movement, to natural disasters such as the earthquake and tsunami that hit Japan. There were many events that affected each of us in different ways.

The 2011 Nobel Peace prize was awarded to 3 women from Africa who, each in their own way, strove for and achieved remarkable change in their countries.  Tawwakol Karman, one of the recipients, is only 32 — tied for the youngest person to receive this distinction.

And while his name may not be familiar to most, Mohamed Bouazizi, an unassuming vegetable vendor in Tunisia, had an enormous impact on the world in 2011, and his tragic act of protest and frustration on Dec. 19, 2010 in the city of Sidi Bouzid, will be remembered by many as the starting point of the Arab Spring movement.

In a more inspirational story, following the tragedy of the tsunami in Japan earlier this year, the Japanese women’s national soccer team won the Women’s World Cup of Soccer, beating many strong teams such as the United States (in the final), Sweden and Germany.

Japan beat Germany 1-0 in the quarter finals.  The lone (and winning) goal for Japan was scored by a Karina Maruyama, a substitute on the team, who had worked at the now crippled Fukushima nuclear plant until 2009 and was inspired by the Fukushima disaster to win the game.

In all of these cases, and many others this year, previously unheralded individuals made a huge impact with their actions.

Now, nothing we do as product professionals is going to have the impact of what these people did. But it’s also worth noting that the problems they confronted are so much greater than those we confront in our jobs. And so we can learn a real lesson from them — that a single individual (for example you!), through determination and perseverance has the ability to affect real change and inspire others to do the right thing — whether it be in the area of human rights, freedom, sport, or simply driving great products through the barriers set forth by those who don’t believe what you believe or see what you see.

While 2011 may have brought many complexity to some in product management, the lessons I’ve learned are some of life’s greatest. Simplicity. As product professionals, we see over-engineered products, processes, services, et al. Early in 2011, I recognized that simplicity is the mother of innovation.
As an example, One Less Drop, by Heckler Design debuted on KickStarter. The premise of the product was simple, see a problem and find a simplistic solution to solve it. Others recognized the simplistic value and pledged almost double of what Dean sought.
So, what impact did this simplistic product have on me? I now look at opportunities differently. Instead of creating massive requirements and reams of information that no one will read of care about, I see innovation in three easy steps:
As you imagine and prove, you have to ensure you discover and validate. Repeat these steps as you gain real and honest feedback at each iteration. Additionally, developing anything without really stepping into a conversation with a potential customer, market or environment is not advised.
I’ve found the One Less Drop to be a great answer to the hundreds, if not thousands of times I’ve lost power cords for every gadget I have in my office and travel with.

This year I learned the power of figuring out things along the way and to stop strategizing in vacuum.

As unattractive as it sounds for master planners and strategists, the reality is, a lot of things around us do not behave the way they are supposed to. This includes ourselves. Understanding the behavior of people and things, and how that challenges a lot of (supposedly) rational hypothesis is something critical to successful product management.

For example, it is easier to draw and force fit a bell curve distribution for your product adoption, but much harder to figure out the real adoption over time and the variables that affect it.

This blog was started by three people – Saeed, Alan and Ethan.  Over this past year, Jim, Jennifer and I joined as regular contributors. Given the sudden increase in the number of writers, we struggled initially to coordinate and schedule our posts, and decide what topics we should blog about.   I suggested the following experiment – why don’t we assign a specific day of the week for of us, let each writer decide what they would write about, and leave it that way for a few months.  We could track progress and decide how to proceed after that.

It was a simple idea.   When we met three months later, we knew answer – it was working. Our page views and traffic were up significantly. We had been consistent in posting on our own. In short, we were doing just fine, without an overarching strategy or ongoing coordination.

Switch to scene two at a large company where a friend of mine works. Over the summer there was a complex project he was working on.  The project was in an emerging technology space, where neither the market nor the products were developed or mature enough, even for early adoption.   It required a very experimental approach towards problem solving – learning as you go.  But the smartest thinkers and ‘strategists’ in the room put forth their biggest plans.  But by the end of the year, after 6 months of PowerPoints and more PowerPoints the project had barely moved and there was nothing to show except PowerPoints and meeting minutes.  No sales funnel or sales leads.  If only the team had approached the whole problem with humility and taken one small step at a time the results could have been different.

My lessons from 2011 – start with small experiments, learn from their outcomes and continuously improve over time.

1. Restrict Unix/Linux CLI to runtests only

2.  Copy each single object with the right-click

3.  Check in UI if anything was changed, if not, do not remove the results

4. Modify Export all metadata in UI NOT to export table defs.  Command line should have both options

5.  Validate the expression (get Gautam to do it J)